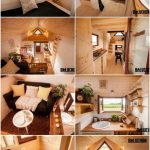 Previously on our tiny house blog, we have featured The Avonlea, a tiny house designed by French architect Baluchon. Now I want to share yet another of Baluchon’s incredible designs with you—another gorgeous tiny house called L’Odyssée!

Baluchon was founded by a designer named Laëtitia. Laëtitia was originally from Nantes, France, and relocated to Paris before she realized she wanted to return home to build tiny houses. Today, Baluchon is still based out of her hometown of Nantes. 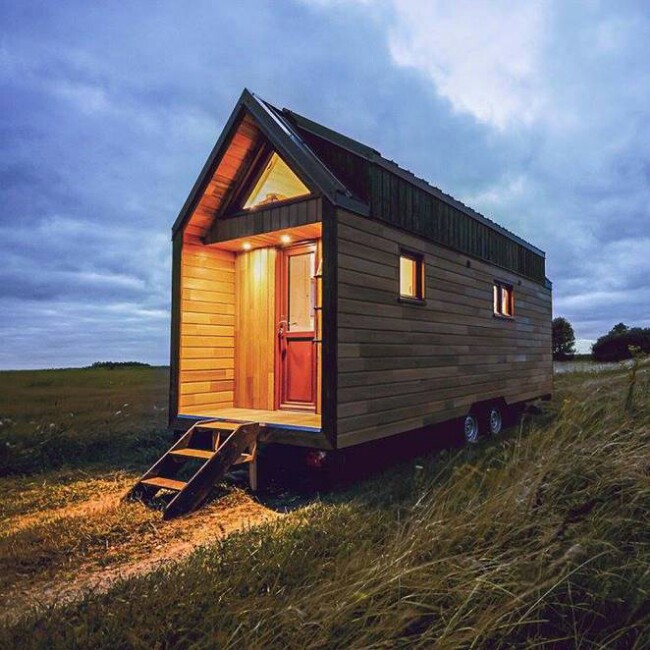 Here you can see an exterior shot of L’Odyssée. The house is very narrow, but right from the moment you see it, you can tell that it is a cheery place. I love the clever porch design which is shielded from the elements on every side but the front—and which also contains the soft glow of the porch lights in such a way as to make the entire doorway look like it is glowing. 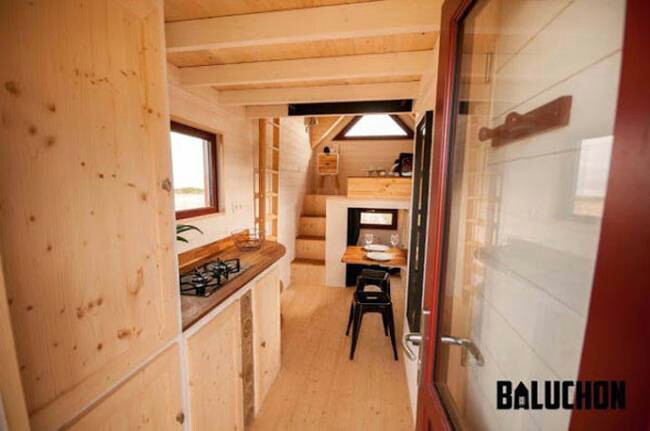 Here is the view through the door. The reddish brown color of the door is present in the trim around the windows, adding an extra pop of color to an otherwise neutral interior. 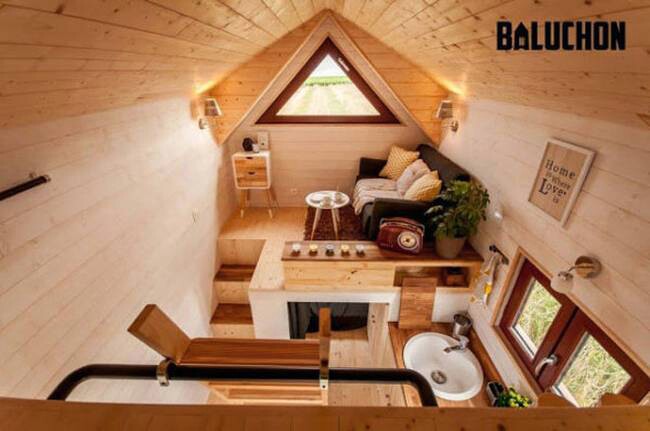 Isn’t this view looking down from the loft stunning? I really like the layout of this home, which is quite atypical. Rather than having two high lofts, L’Odyssée contains one high loft and a raised platform across from it. There is a couch on the platform, making a cozy seating area which is separate from the kitchen. The triangular window is really striking. 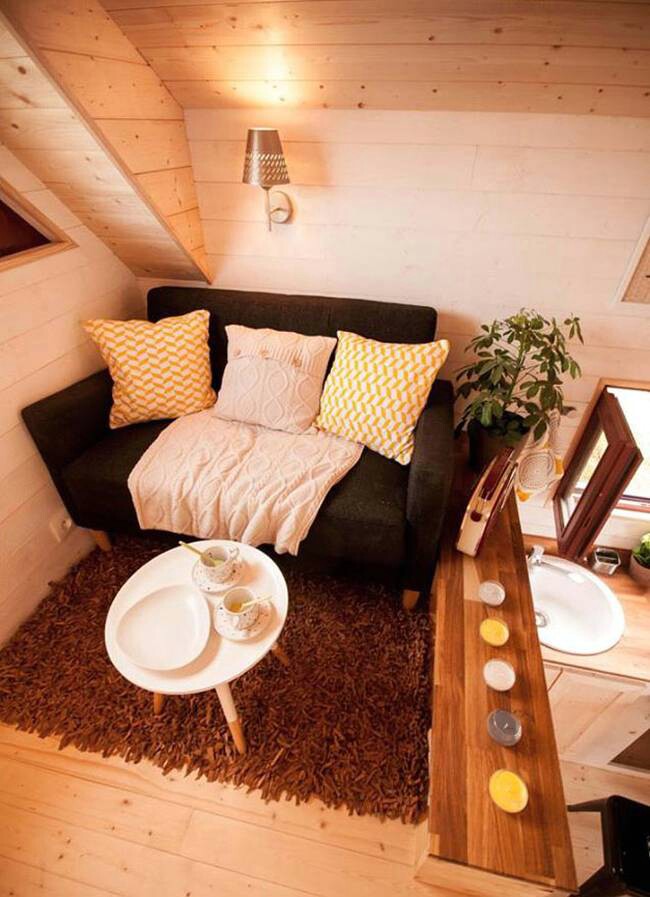 Here is a view of that snug seating area looking directly at the couch. 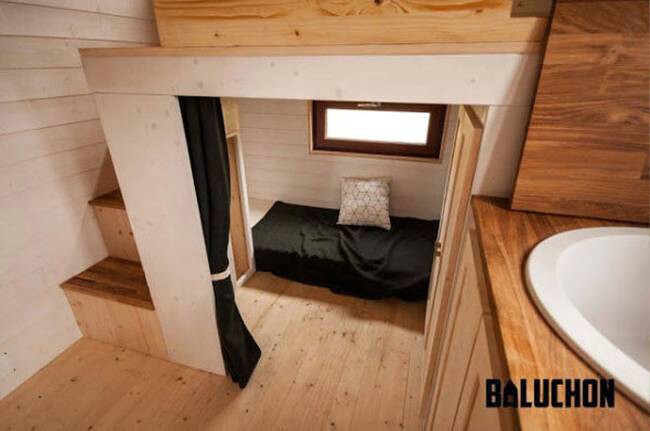 If you were wondering why the seating area was raised, it wasn’t just to differentiate it from the rest of the room—it was also so that this cute little room could be concealed underneath. It is no larger than a crawlspace, but it does have room for a bed, and there is even a window to let in some light and keep it from feeling claustrophobic. It’d make a great bedroom or playroom for a small child, or it could be used for guests. 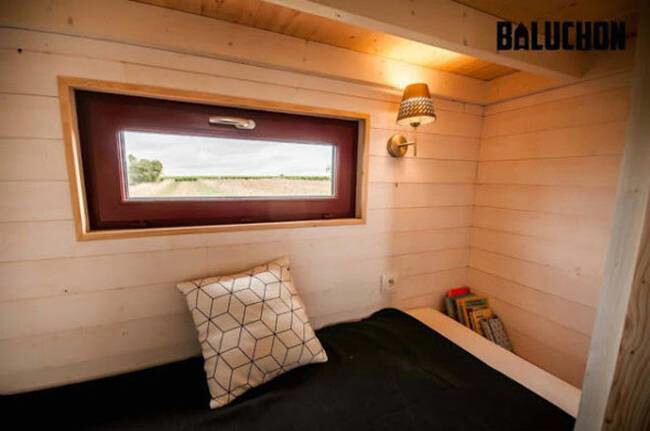 Here is a photograph taken from inside the little room, so you can get more of a feel for it. 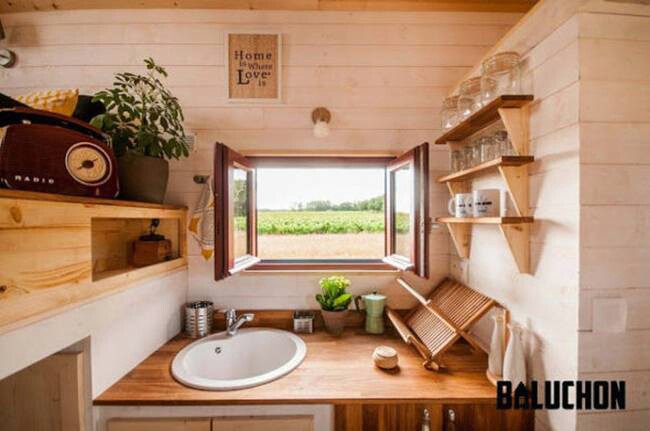 The kitchen is really tiny, but isn’t it amazing? Wouldn’t you love to be washing dishes over this little sink and looking out the window at that view? Notice the way that the sink is situated in the countertop.

It is at a slight angle, which frees up space on the counter which would otherwise be unavailable. 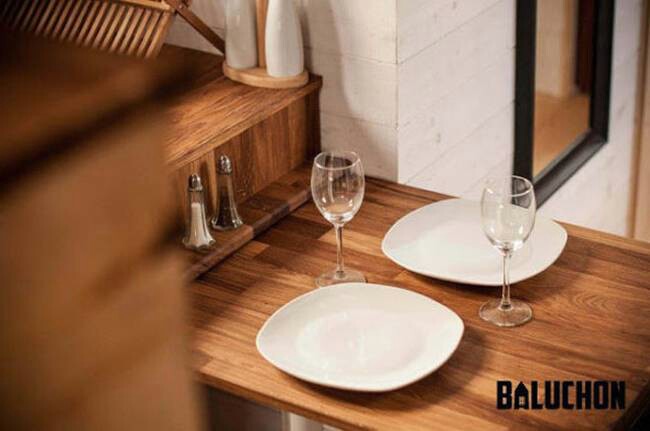 This photo shows the pull-out dining table. Like the kitchen sink and counter, it is very small, but it fulfills its purpose. 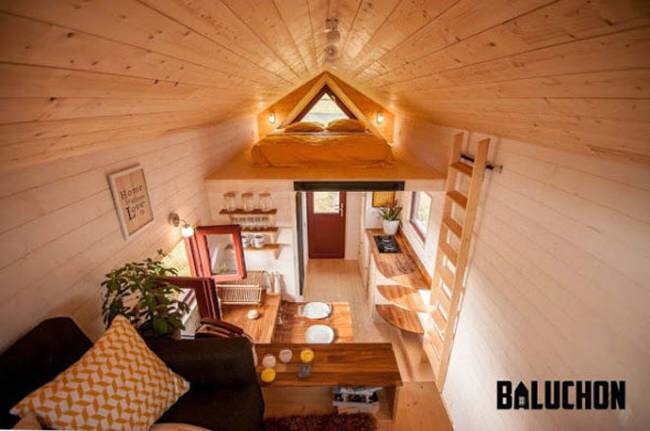 Here we have a photograph which looks back over the kitchen toward the loft. There is a large bed up there, and still a bit of floor space around it. Notice how the ladder is latched to the wall, up and out of the way. When you do not need to use it, this is quite a convenient feature to free up a bit of extra room. Also observe how the triangular window in the loft compliments the shape of the ceiling. 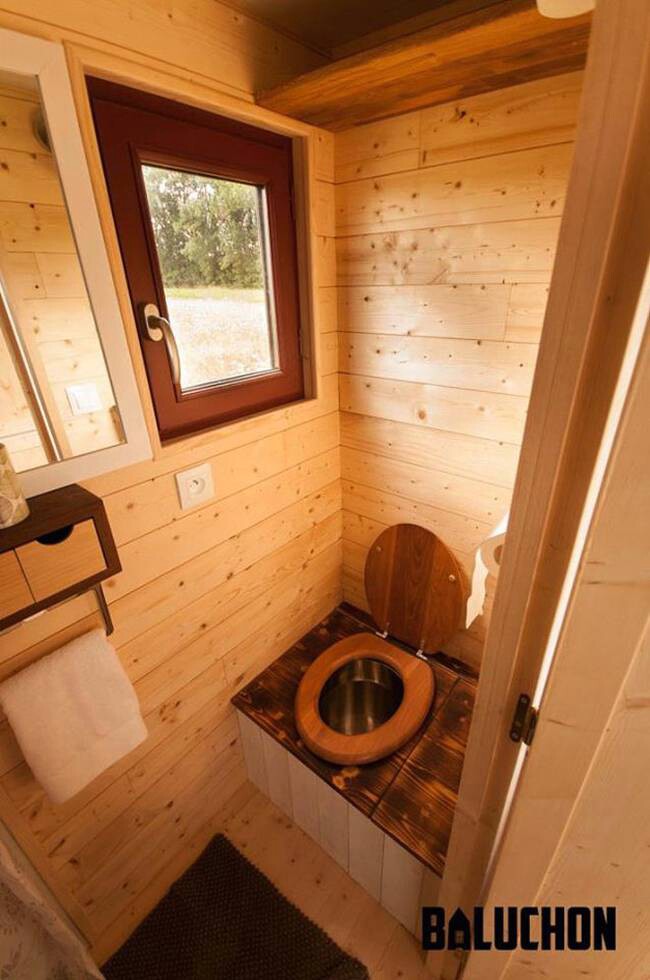 The toilet has a bench design which has become very popular in tiny homes. The wood seat blends in nicely with the bench as well as the walls. There is a little extra space next to it which could be used to store some towels, a decorative plant, or some other item. 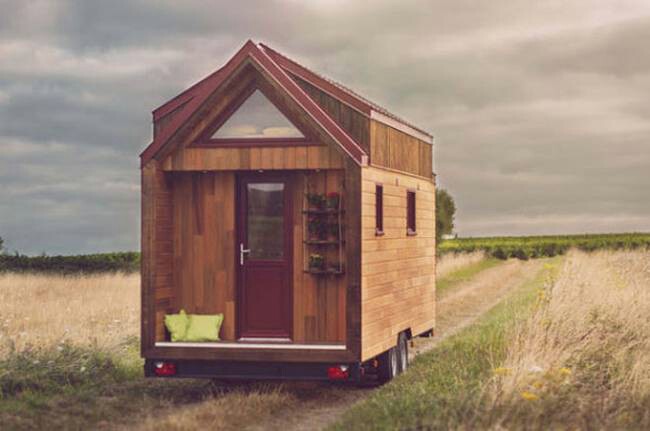 Take a look at the sheltered front porch. This design is another that we have seen in a number of other tiny houses lately. Usually the porch is larger and more deeply set, but that tends to intrude too much on the square footage inside the house. This one is just large enough to sit down and swing your legs over like you are sitting on a bench. It is a nice compromise, because you can still use it, but it isn’t eating up all the space inside the home itself.

What will you pay for L’Odyssée? You can expect to shell out around $50,000 USD. While that is not cheap, you get all the furnishings as part of your purchase, and they are made of beautiful oak, ash, Douglas fir, red cedar and spruce. So this actually quite a good deal for a beautiful and functional tiny home. Check out the link below for more information on L’Odyssée and Baluchon’s other lovely creations!

Previous Post: « Micro-Apartment by Fort Design Build Includes a Built-In Catwalk
Next Post: If You Think Living in a Cardboard Box is Bad, Wait Until You See This One! »