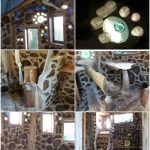 If you are visiting Graham Island in Haida Gwaii (previously the Queen Charlotte Islands) off the coast of British Columbia, you may stumble across quite an extraordinary tiny house. Nope, this is not your typical tall, box-shaped trailer with suburban siding, square windows, and a double-loft layout—it is something altogether different, unique and unusual. 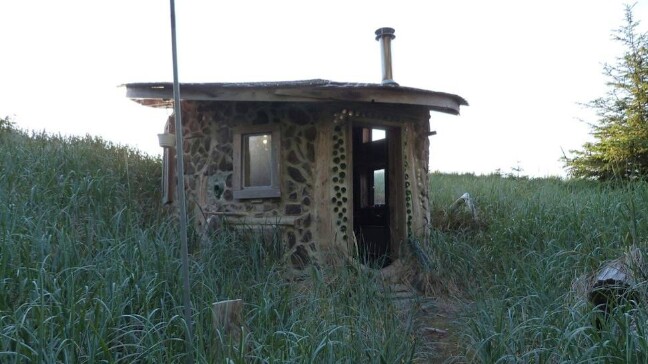 This tiny house was constructed out of a combination of bottles, bones, driftwood, cordwood, and mortar. It is the creation of Netonia Yalte, called the “Stackwall Queen of the Queen Charlotte Islands.” 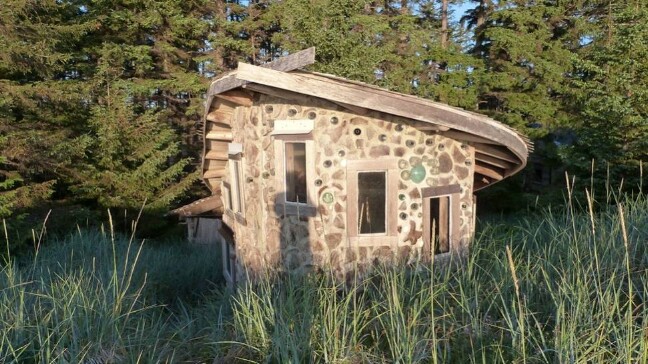 At the time that Netonia built the home, she was struggling financially. She had three young children to provide for, and could barely support them. 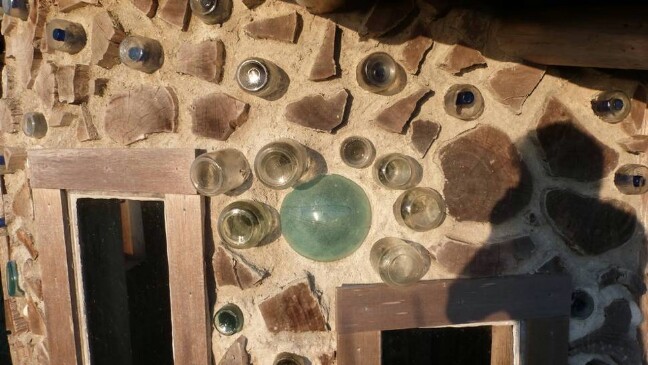 She read a magazine article titled “How to Build Out of Rock,” and cringed at the thought of hauling heavy boulders from the beach. That was when a friend brought her a book called Cordwood Masonry. Maybe it was serendipity, maybe it was fate—but it changed her life. You may have heard of cordwood masonry by another name—it is better known in America as “stackwall.” 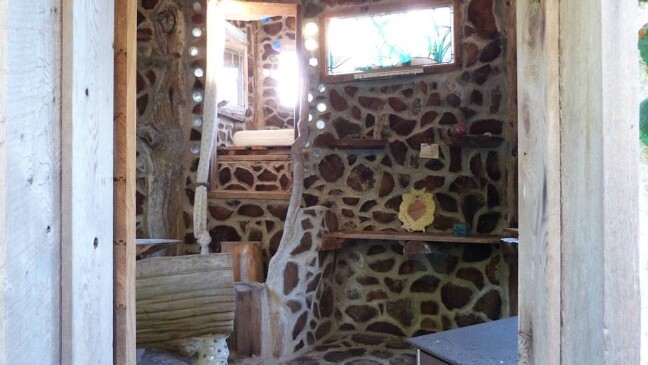 After reading the book on cordwood masonry, Netonia got to work. She dug the foundation, felled a few trees, and excavated the roots. A year and half and forty-two loads of wood later, she had succeeded at constructing something beautiful. 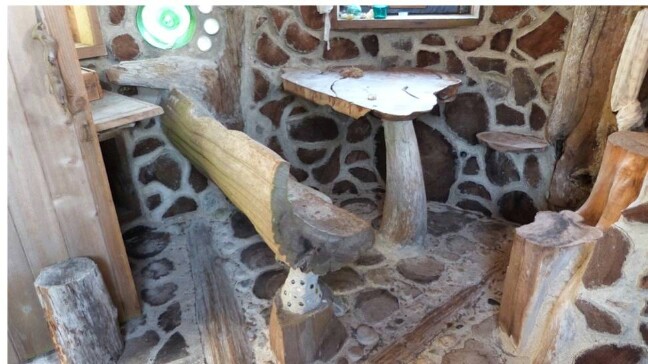 As you can see, those bottles really are remarkable when seen from the inside! On the exterior, they add ornamentation, but inside the home, they add light. 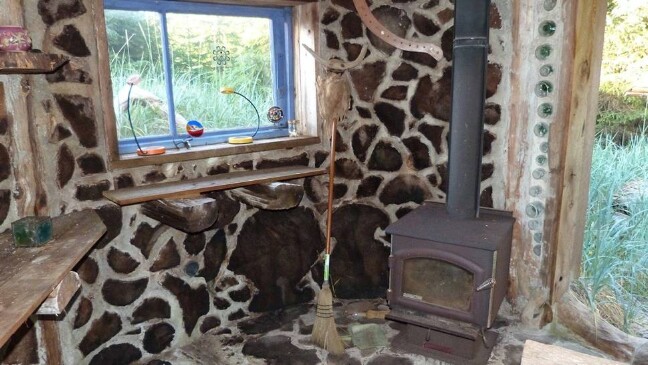 Netonia refers to homes built using stackwall as “living, breathing” entities. With an organic design like this, it is hard to disagree with her imaginative assessment. 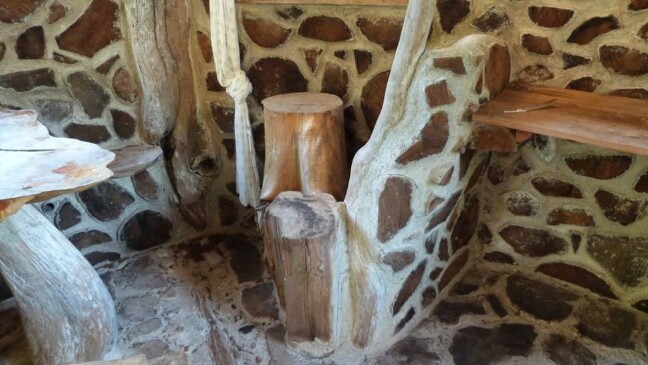 The building process is one that Netonia describes as deeply liberating. “It’s about using your body and doing whatever you are capable of … without being dependent on the bank and the hardware store,” she tells Susan Musgrave at DayCreek.com. She goes on to explain that stackwall also liberates builders from restrictive design rules. With stackwall, you don’t have to use right angles or rely on nails to hold planks of wood together. Instead, you have limitless possibilities, which is why every stackwall home looks entirely unique.

After constructing her own stackwall home, Netonia has gone on to teach others how to construct affordable homes out of found supplies using the same stackwall techniques. 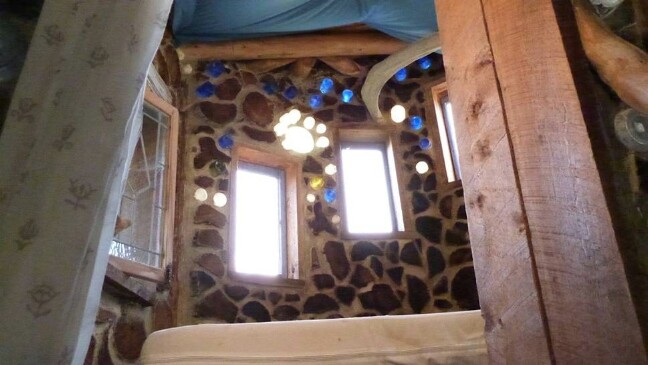 It is difficult to see from this shot, but what you are looking at above is a sleeping loft which looks like it belongs in a fairytale. 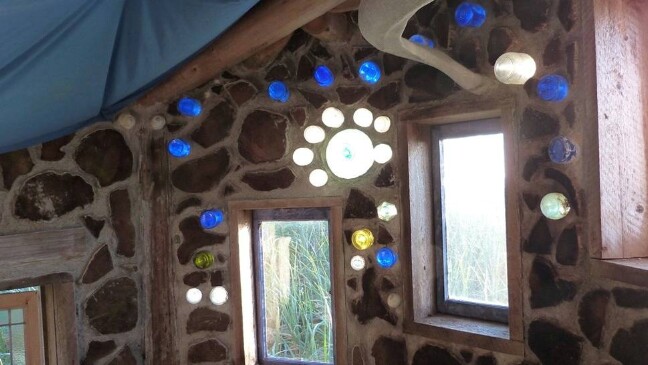 You can see some of the roof beams here. They are made out of driftwood and whalebone. 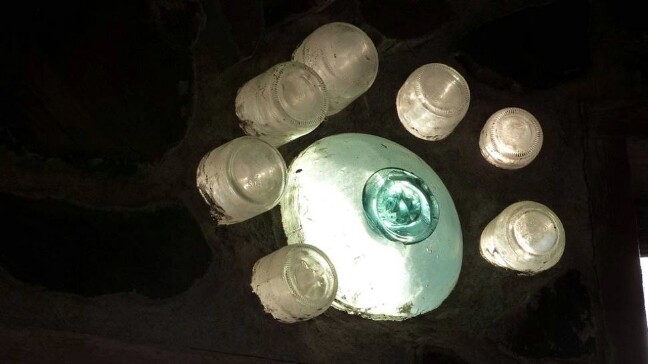 Here is a close-up on some of the bottles which let the light in. 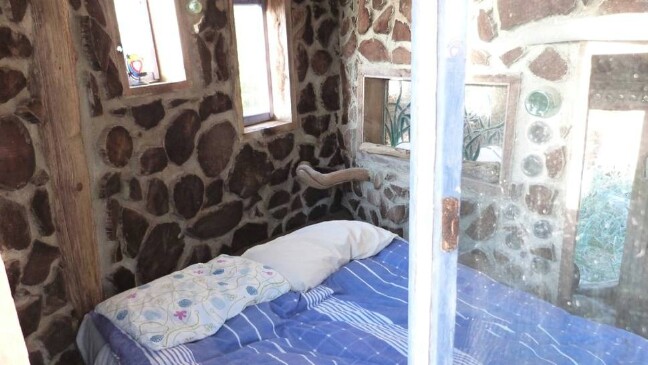 Here is a better view of one of the sleeping areas inside this amazing unique tiny home. 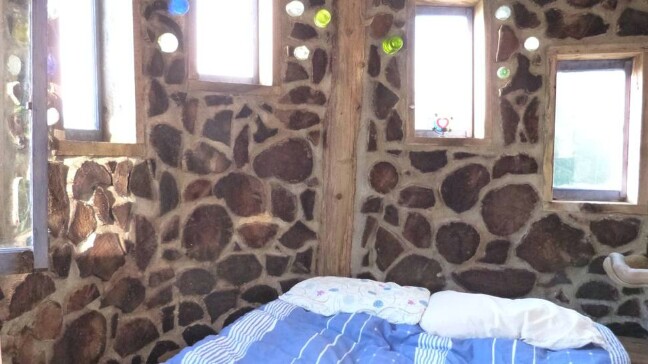 There is no electricity in the home, but the walls are thick and provide excellent insulation from the sea winds. The most questionable design element from a safety standpoint is the staircase, which is made out of stumps of wood. In the dark at night, they can be hard to see, though there are pieces of driftwood protruding from the wall which you can grab to support your balance.

It is hard to say what is more inspiring—the magnificent home that Netonia has constructed, or her inspirational perspective on life. As she tells Susan Musgrave in her interview (linked below), “You live it, you live your home. You put so much of yourself into the building, you become part of it.”

The house should last for a long time. It is believed that the oldest stackwall building in the world, located in Lebanon, has been standing for 2,000 years. Netonia’s creation is one for the ages, as is the inspirational story of its construction in the face of adversity. The odds were against Netonia, but she used her hardships to create something beautiful.